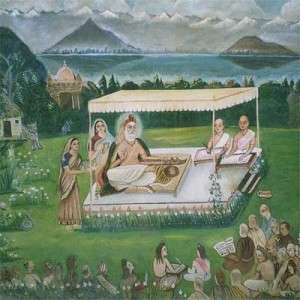 Abhinavagupta (950-1020, Kashmir, India) was one of the most powerfully insightful, deeply profound and logically-clear philosophers of the reality of Living Unbound that the world has ever known. However, he is not at all widely known outside of the circles that his work has touched directly, namely the non-dual Shaivism of Kashmir and certain Indian disciplines of poetics and aesthetics.

Here are some quotes from Abhinavagupta on the simple reality of Living Unbound that is the true nature of everyone, the ground of being of pure, liberated awareness underlying “accumulated multiplicity” as Abhinavagupta terms it.

This bliss is not like the intoxication of wine or that of riches, nor similar to union with the beloved. The manifestation of the light of consciousness is not like the ray of light from a lamp, sun or moon. When one frees oneself from accumulated multiplicity, the state of bliss is like that of putting down a burden; the manifestation of the Light is like the acquiring of a lost treasure, the domain of universal non-duality.

Philosophy is an elaboration of different kinds of experiences. The abstractions of high-grade metaphysics are based on spiritual experience and derive their whole value from the experiences they symbolize.

Both characteristics, unity and diversity, are found in that which does not fall to the level of an object but which, because it is consciousness, is the supremely real Light. It has only one characteristic, namely, consciousness which is the perfect medium of reflection. This is what experience tells us.

The truth is therefore this: the Supreme Lord manifests freely all the varied play of emissions and absorptions in the sky of his own nature.

The Light is the supreme reality that encompasses all the categories from Earth to Paramasiva, while the unfolding of the reflective awareness of the Heart of I consciousness within it, distinguishes between them.

The extremely pure conscious reality transcends all talk of succession and its absence.

Immersing himself in the supreme reality, clearly aware that consciousness is all things, the yogi’s consciousness vibrates. This vibration is the Great Pervasion.

The yogi should abide firmly fixed in his own nature by the power of the exertion of his expanding consciousness. Thus he is established on the plane of Bliss relishing the objects of sense that spontaneously appear before him. Perfected yogis (siddha) , are ever steadfast in this, the Supreme Gesture (mudra), the perfect and unobstructed expansion of the awakened.

The couple (yamala) is consciousness itself; the unifying emission and the stable abode. It is the absolute, the noble cosmic bliss consisting of both (Siva and Sakti). It is the supreme secret of Kula (the ultimate reality); neither quiescent or emergent, it is the flowing fount of both quiescence and emergence.

The variety of this world can only be manifested if the Highest Lord, Who is essentially the pure light of consciousness, exists; just as a surface is necessary for a picture.

Other achievements are in vain if one has missed the supreme reality, the Self. But once one has attained this reality there is nothing left that one could desire.

Source: by The Doctrine Of Vibration By Mark S. G. Dyczkowski