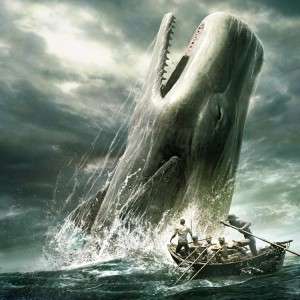 Many of us may recall Moby-Dick as required reading in high school, and/or at least know the outline of the story:

A Nantucket whaling-ship captain named Ahab seeks revenge for getting his leg chomped off by a White Whale named Moby. Drowning ensues. Moby gets away. The End.

Many people have wondered why Herman Melville ended his somewhat strange tale of Ahab vs. the White Whale on such a tragic note.

To paraphrase Jed McKenna: What could be the message?

And, by the way, very special thanks to Jed McKenna for pointing out the facets of Moby-Dick which resulted in the video below.

Those are best described in the video.

Please take a few minutes to watch — and please let us know what you think.

Suffice it to say that if you haven’t read Spiritually Incorrect Enlightenment by Jed McKenna, your views about Moby-Dick may just be changing rather radically in the next few minutes (if you watch the video, that is).

Jed McKenna posits some rather staggering and radical ideas about Moby-Dick, which are highlighted in our newest video.

The most staggering and radical aspect of all, though, it that having just re-read Moby-Dick, and viewing it afresh, per Jed McKenna’s amazing insights — it appears he’s either largely, or completely, correct, with respect to his amazing, Living Unbound-related insights, not only about the story of Moby-Dick, but about the book’s author, Herman Melville.

And even “partially” (correct) would make Moby-Dick an infinitely more interesting and important story than most of us could ever have imagined.

Being a bit about spiritual symbolism ourselves, as well any and all resources that can help us all with Living Unbound, we’re now going to be studying Moby-Dick in greater detail as well, with the intention being to expand upon Jed McKenna’s initial insights.